At home, I recently encountered several failures or problems caused by batteries.

There are a lot of batteries in the average home. Your gasoline powered cars have a lead-acid battery for starting. Electric cars include giant banks of lithium cells.

Flashlights, consumer electronics remote controls, and many other devices use those ubiquitous AA or AAA cylindrical cells. These come with various battery chemistries: carbon-zinc, alkaline, nickel-cadmium (NiCd), nickel-metal-hydride (NiMh), and lithium. Each type of battery chemistry offers different advantages and drawbacks. Carbon-zinc batteries are very cheap, but have comparatively low output and cannot be re-charged. Alkaline batteries have better energy density and lower self-discharge, but cost more.  NiCd and NiMh are rechargeable, but cost much more per cell. They also offer a lower nominal output voltage (typically 1.2V versus 1.5V for alkaline batteries).

Lithium-ion batteries offer extremely high energy density and are rechargeable, so they are found in laptops, cellphones, tablets, and electric vehicles.

A few months ago, I noticed that the keyboard of my favorite laptop computer looked like it was trying to simulate a wave on the ocean. Touching the keyboard, I could feel it was too hot, and the bulging case made it clear that something internal had gone very wrong. After getting the screws out of the base, my worst fears were confirmed. The Lithium-ion battery pack was swelling up like a bizarre balloon.

Dell seemed to think that it was perfectly okay to not have any stock of replacement batteries and no ETA for them, leaving me to navigate through the various claims of genuine-ness of replacements on eBay. The replacement battery I chose arrived quickly and it does fit without distorting the keyboard or the case. The new battery also functions, but now the laptop randomly and frantically throws out battery-related flashing LED error codes and abruptly shuts down to a sleep state. It then charges for less than a minute and decides that the battery really was fully charged all along. Fortunately (so far) it seems to recover without losing work in progress. But I would be reluctant to trust this laptop during a critical presentation.

It happens that most of my devices demand low or medium currents; and rarely continuously. In some cases, these devices draw no current at all until I need them in a relatively urgent situation: for example a flashlight that has been stashed in a car glove box for several months. When I need that device, I want it to work and don’t want to find that it has turned into a gooey, non-functional mess.

I have found several devices with leaking “brand-D” AAA size alkaline batteries. The nastiness that leaks from these batteries seems especially corrosive of the nickel-plated steel used for battery terminals (both tabs and coiled springs). I can partially clean up the terminals with various methods, but they are far from the original pristine shiny surfaces. Perhaps electro-plating could help. 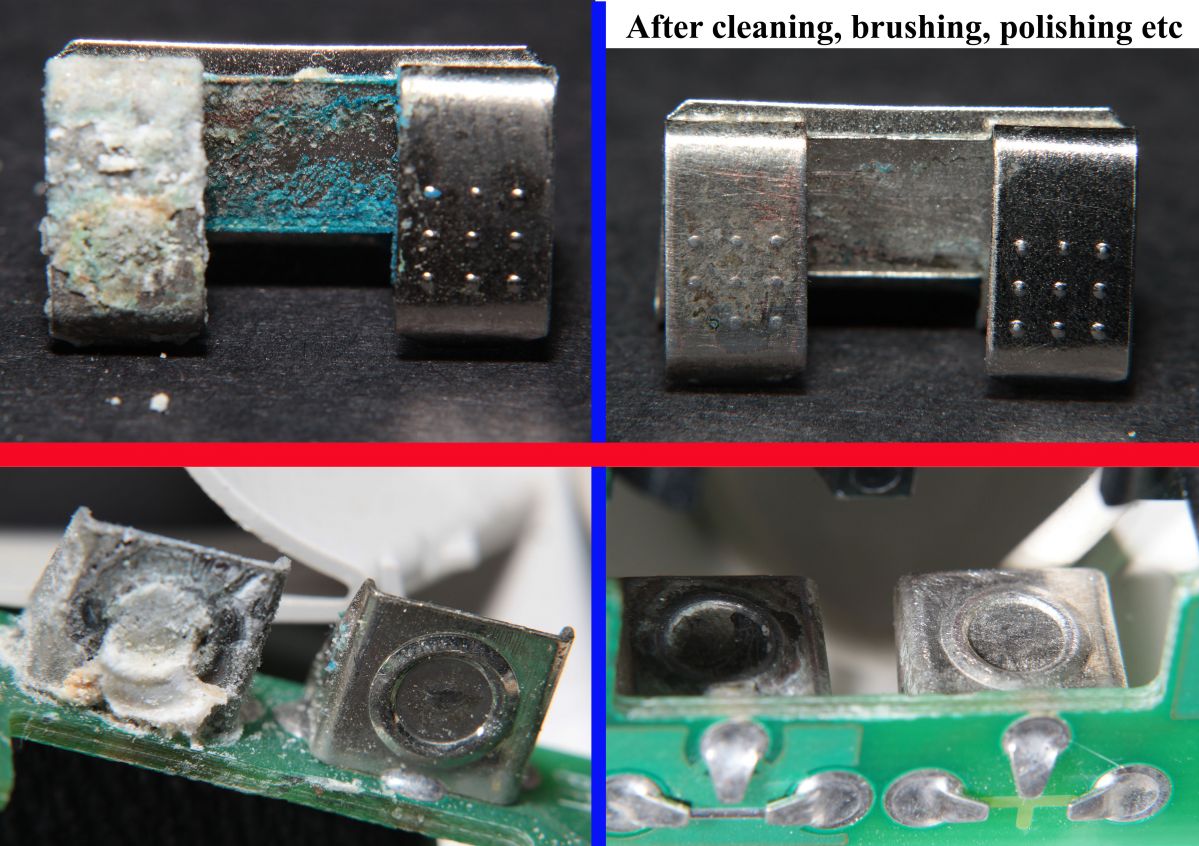 One post on LinkedIn expressed a strong belief that brand-D had thinned the walls of their AA and AAA cells in order to gain more volume for extra life of these batteries. I have had plenty of failures of brand-D AA and AAA batteries purchased in large retail packs. I have also found some not-for-retail sale batteries of the same brand that showed no evidence of leaking after several years of standby operation. I wonder if these cells were manufactured for lower load capacity or shorter life, but also were specified for lower probability of leakage.

Dave Jones at eevblog has suffered similar alkaline failures and constructed a scientific experiment to see if various brands or models of cell could be made to leak. Unfortunately, his results were inconclusive, as none of the cells he tested started leaking.

I wondered about this and have at least one guess about why he got that result. He placed a load on each cell, and ran them for many months. This means that each cell was busy converting its chemical energy into electrical work and thereby depleting its active chemicals over time.

In contrast, I think about high capacity cells sitting with all of that energetic chemistry just dying to do some real work. At worst, they might be seeing some internal electrical leakage.

But maybe they need a short burst of high current load to get the chemistry running.  Something like flashlights, where we intuitively turn them on, check the brightness, then shut them off, just to make sure the batteries start out “good.”

I also wonder about when there are temperature cycles to stress the joints and seals of the batteries. Can internal leakage suddenly rise due to dendrite growth? I am not a battery designer, but it is easy to envision an internal low-resistance path forming and leading to internal high-rate discharge, heating, rapid mechanical self-damage, and then leaking of corrosive chemicals.

One clever commenter on the YouTube said that the likelihood of leakage and damage increases directly proportional to the value of the instrument.

I have typically used Panasonic (previously Sanyo) NiMH Eneloop batteries in my most valuable devices—mostly because I wanted to be able to recharge them.  I also carry extra sets of batteries. All of the batteries for a specific set of devices usually get re-charged the night before I intend to use them. I have never had an Eneloop battery leak, but that is no guarantee that you won’t.

I have personally never found a leaking 9V brand-D battery (at least that I can remember). The milliamp-hour (mAH) ratings for these tend to be lower, but there are multiple small units stacked internally to get the higher voltage.

In preparation for this essay, I built a list of all of the battery-operated devices in my house.  I was stunned to find that the total number was easily over 100 devices when I got tired of counting.  My wife and I have multiple instances of some kinds of device (for example, flashlights or cell phones) but in any case, I found at least 24 different categories of battery operated device. That’s a lot of batteries.