There seems to be a lot of talk recently about freedom. Some people espouse their opinions loudly that “I have the freedom to do X and you (and/or the government) can’t stop me!” Sadly, the statements never seem to include any thought or expression regarding the reasonable limits or personal responsibilities associated with any specific freedom.

A mathematical version of this would say that you and I are each entitled to half of the distance between us. The laws in the United States have long recognized such limits on freedoms and likewise impose criminal and financial responsibility on those who do not honor such limitations.

Here is what I mean by reasonable limits of a freedom. I will explain with a few examples. If I am inside my house, with nobody else at home, and I choose to strongly swing a baseball bat, I have the freedom to do so. But if I am surrounded by many people in a crowded public space, and I try to exercise the same freedom, I will be arrested by the police for injuring bystanders—or possibly for reckless endangerment of those people if they somehow managed to get out of the way.

In a rural area, where the nearest neighbor might be several miles away, we have the freedom to shoot with a rifle or a handgun. But in many jurisdictions it is illegal to discharge a handgun or a long gun within city limits. The legal system recognizes that the general danger to the public is simply too high to allow projectiles that travel more than a mile to go whizzing about in spaces where there are many people within 100 feet of any spot. Conversely, there is little danger when guns are used carefully in rural areas.

Refusing to wear a mask in a crowded space during a pandemic is as dangerous to other folks as firing a gun into that crowd. In either case, not everyone will get hurt, but the likelihood of hurting someone is very high.

I believe that this dichotomy in perceived freedom contributes heavily towards many of the political divides in America today. People with great distance to neighbors are accustomed to greater freedom. It is tremendously difficult for them to picture themselves living in the close-quarters spaces of densely-packed cities.

Likewise, our urban and suburban dwellers understand well the limitations of their actions due to the closer presence of neighbors. Many have experienced the burden of an inconsiderate neighbor simply from noise or other irritating--but likely non-dangerous effects.

The burden of communicating our world-view to other folks requires a lot of careful thought about how those other people might be viewing the limits of their freedom.

The flip side to this discussion involves responsibility. City dwellers become conditioned to government providing a lot of specific services and care that a rural dweller assumes is their own responsibility. In the city, it can be extremely efficient and effective for government to provide common services. Great distance means that these same services are not easy or cost-efficient to provide as extensively in rural areas. Again, the difference in perception makes it difficult to bridge the divide in attitudes and expectations.

We can draw a graphical representation of this, where the dots represent individual people (persons) and the red circles represent the limits of each person’s freedom. 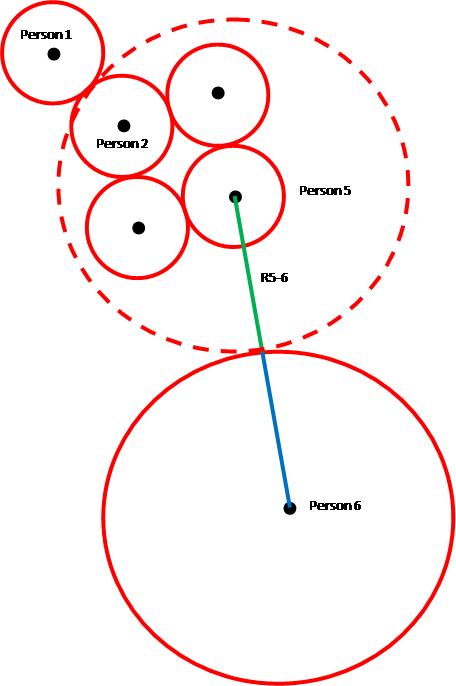 Clearly, Person 1 and Person 2 have the least freedom, since they are close to each other. Nonetheless, each of them should be entitled to freedoms which represent half of the distance between them. Person 6 will be entitled to a much larger apparent freedom, since the distance between Person 6 and any other person is much larger.

We all need to recognize that regardless of where we live there are times when we will find ourselves in different environments. This is when we really need to listen, instead of simply demanding that everybody else accommodate our personal world-view.

The government has limits. They cannot do everything for you and cannot relieve you of your personal responsibility. Likewise, every person must recognize that their actions have consequences and might be clearly or invisibly dangerous to others.