We need to be careful about how we grade work.  Too many of us focus on only one of the four constraints of any project: People, Time, Money, or Results.

A company that only grades effort on cost (price) will quickly crash their ship against the rocks of quality and time.  Your company would not fall into that trap, would they?  Did they?  Oh.

Then again, it is just as bad to only grade on quality.  “We want and deserve the best!”  Sure, good luck with that in the marketplace.  As my friend George says, “There is a lot more ‘cheap’ sold than anything else.”

Have you ever heard of a company that wanted to treat their family members, customers, or employees better than anybody else in history?  Lavish parties and personal luxury?  That was wonderful up to a point, but soon they faced the bankruptcy judge.  He was not amused.

You equally cannot just grade on schedule (time).  It takes nine months to make a baby, and putting nine women on the job will not hurry that process along.

One inspiration for my comments this week has been an excellent essay at LinkedIn by Dr. Thomas Kennedy, CEO at Raytheon.  He writes that engineers have a secret way to never become obsolete: they have the skill of solving problems.

I have written many words here with pretty much the same message.  Getting hired and staying hired is a matter of making sure that folks know you can and will solve problems for them.

As I read Dr. Kennedy’s article, a little bell in the back of my head kept telling me that no matter how much I agreed with him, there was an exception: a big “but” looming behind the scenes.

An engineer can’t solve problems for a company, if they won’t give that candidate the opportunity to work.  It seems that far too many companies are only grading employees on cost.

The comparisons an employer makes are only valid if they grade on all four constraints.  If they only grade for cost, they will find that their quality slides, delays expand, and people (including customers and management) will ultimately be very unhappy.

This is my fundamental objection to completely outsourcing to lower cost, less experienced teams.  Yes, they often can solve some of the problems.  Yes, they might save some money in the short term.  But the trick for management is to understand the true nature of their business.  Ultimately, any business needs to be solving problems for their customers (not just solving their own problems).  Handing that work to strangers, just helps create future competitors.  Even if that outsourced team succeeds in the short term, your company will lose in the long term.

The best teams with whom I have worked, always had a good mixture of experienced (probably expensive) employees (i.e. great problem solvers) mixed with less-experienced folks who were eager to absorb the knowledge and find their own new paths based on what they learned.

One of the most valuable aspects less-experienced employees bring to a company is that they are too ignorant to know that the things they want to do, cannot be done.  They just go do them.

In product design, in Project Management, just like everything else in life, the secret is in finding balance, finding the center.  Gigantic success comes from nearly perfect optimization: balancing all the constraints, and only compromising as little as possible to maximize the value of the solution.

Think of a great sports team.  Think of a great musical band.  Think of a magnificent construction project.  They all depend on diversity of skills, plus the ability to organize and act with singular purpose.  Enduring legends in any activity represent magical balance, individual commitment, and a tiny spark of leadership.  We all want to be part of something great.

Are you (the boss) enabling success?  Or are you the person killing success by making poor choices in grading?

Equally important, if you are the candidate, how are you making it clear to your prospective employer that you represent outstanding value?  Can you present your value within all four constraints? 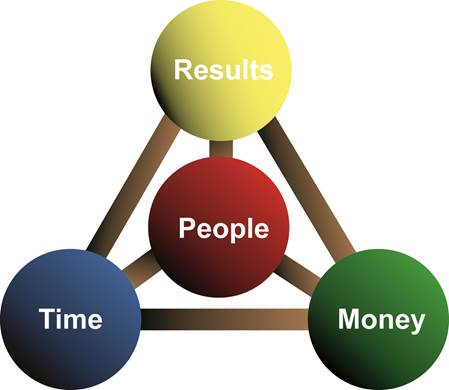